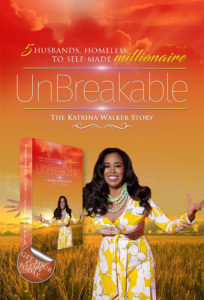 Unbreakable is the riveting story of Katrina Walker, a self-made millionaire who went from being an abused teen bride and mother of four, to one of the most successful women in her region.

It’s the story of five marriages and a page-turning roller-coaster ride through each of them, including perilous situations that included being penniless, homeless, and ultimately a millionaire. She brings you in with action and emotion from page one, recounting a horrific home invasion that nearly took her life, and the day her beloved mother dies. The reader goes deep into her life growing up in Memphis TN. From when her mother left to go get cigarettes, and returned 9 months later from Ohio with a newborn Katrina, to growing up in Orange Mound (the first place Blacks could own property) in the home built by her great-grandfather. At the age of 8, Walker figured out how to make money by ironing sheets for her neighbors, and discovered her business sense. As a child in the 1960’s, she writes of Dr. MLK Jr. visiting Memphis to speak up for sanitation workers like her grandfather, only to be assassinated there. These events planted a seed in her that grew into the desire to empower her people, but only after the wild, sometimes hilarious, often emotional road to empowering herself.

“This book will make you laugh, cry and provoke thought.” – J.D.